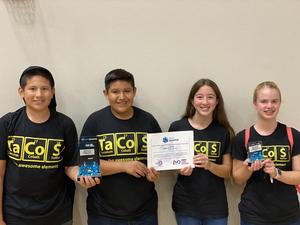 The team of Ruben Alcazar, Pedro Chavez, Cate Peterson, and Libby Sanders started the first portion of the competition with a Robot Mission, taking second place in the category. After that, the Sequoia team had a series of interviews that started by making a presentation of their project, which covered accessibility and inclusion in an elementary school setting. The second portion covered the design of the robot, coding of programs and methodologies involved. The third portion covered the team’s core values on topics such as teamwork, innovation, inclusion, impact, and professionalism.

Nicknamed “The Elemental Engineers,” the team earned a chance to compete in the Central California Championship on December 14.